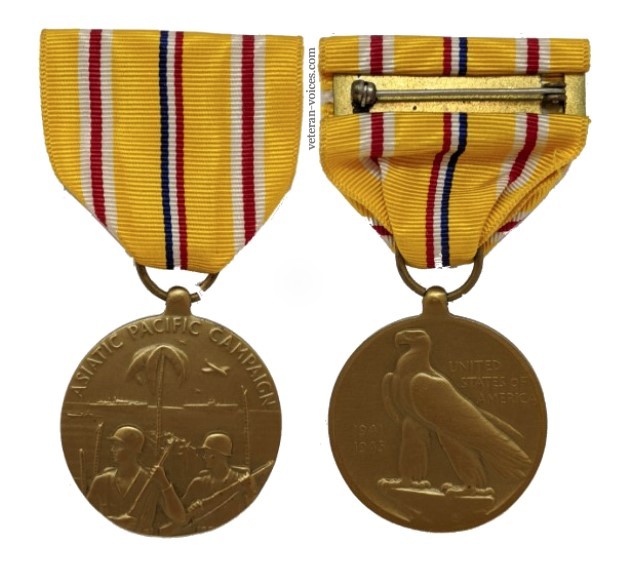 Last month in this series we talked about the European-African-Middle Eastern Campaign Medal of World War II, and this month we are discussing its equivalent in the Pacific theater.

The Asiatic-Pacific Campaign Medal was established by President Franklin D. Roosevelt’s Executive Order 9265 dated 6 November 1942, and subsequently amended by President Harry S. Truman’s Executive Order 9706 dated 15 March 1946, to be awarded to members of the Armed Forces who served in the Asiatic-Pacific theater between 7 December 1941 and 2 March 1946.

Service criteria for the Army and Army Air Forces included that the service member qualified under any of the following conditions: 1) Permanent Assignment, 2) Passenger status or Temporary Duty assignment for either 30 consecutive or 60 non-consecutive days, or 3) Participation in active combat against the enemy.

Service criteria for the Navy, Marine Corps, and Coast Guard included that service members qualified under any of the following conditions: 1) Sea Duty for 30 days, 2) Shore Duty for 30 days, 3) Patrols for 30 days, 4) Combat, 5) Hazardous Duty, 6) Passengers (only if the individual or ship was attacked or engaged in combat with the enemy). 7) Temporary Duty (prior to 1 July 1945) for 30 consecutive days or engagement in combat. After 1 July 1945 no individual on temporary duty was eligible for the campaign medal unless specified by the Area Commander

The ribbon design was approved by the Secretary of War in November 1942. The background of the ribbons was to be yellow with red and white stripes on the left and right sides to represent Japan. The center blue, white, and red stripes were taken from the American Defense Service Medal to represent the continued defense of the United States after Pearl Harbor.

The obverse of the medal was designed by Thomas Hudson Jones. In the foreground it showed troops landing on an island or atoll among palm trees (some broken) with an aircraft carrier, battleship, submarine, and planes in the background and the words “Asiatic Pacific Campaign” across the top. The reverse of the medal was designed by A. A. Weinman and was the same design as used on the European-African-Middle Eastern and American Campaign Medals which depicted a bald eagle in the center, the dates of American participation in the war, “1941-1945,” to the left of the eagle, and “United States of America” to the right.

Army Campaigns of the Asiatic-Pacific Theater


Navy Campaigns of the Asiatic-Pacific Theater

We have provided a downloadable resource PDF of the Asiatic-Pacific Campaign Medal available for personal use.