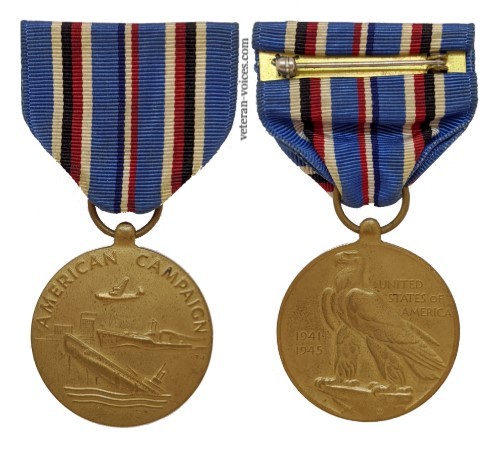 The American Theater included North America (except Alaska which was part of the Pacific Theater) and South America. Service criteria for the American Campaign Medal included that the service member qualified under any of the following conditions:

The ribbon design was approved by the Secretary of War in November 1942. The background of the ribbons was blue to represent the Americas. The black and white stripes represented Germany and the red and white stripes represented Japan. The center blue, white, and red stripes were taken from the American Defense Service Medal to represent the continued defense of the United States after Pearl Harbor.

The obverse of the medal was designed by Thomas Hudson Jones. In the foreground it showed a sinking enemy submarine, with a B-24 airplane, a Navy cruiser, and buildings representing the “arsenal of democracy” in the background and the words “American Campaign” across the top. The reverse of the medal was designed by A. A. Weinman and was the same design as used on the European-African-Middle Eastern and Asiatic-Pacific Medals which depicted a bald eagle in the center, the dates of American participation in the war, “1941-1945,” to the left of the eagle, and “United States of America” to the right. One bronze service star was affixed for participation in each constituent official campaign.

Army Campaigns of the American Theater


Navy Campaigns of the American Theater

We have provided a downloadable resource PDF of the American Campaign Medal for personal use.