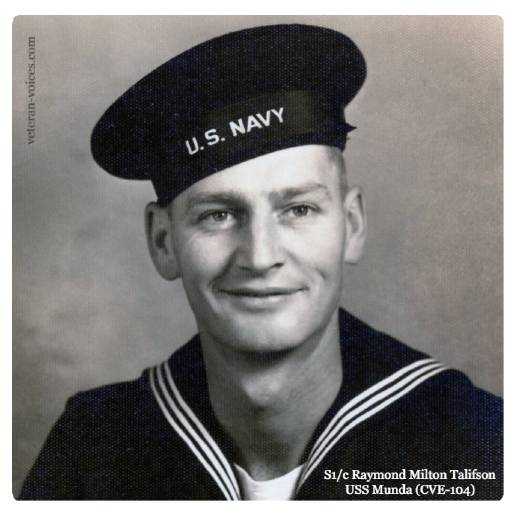 He attended and graduated from Teton County High School where he had played football and was a reporter for the school newspaper. After high school he worked as an auto mechanic for Bison Motor Company and then a carpenter. Ray married Irene M. Proff on 3 February 1940 in Great Falls, Montana.

Ray was inducted into the Navy on 17 September 1943 for a term of two years with the Naval Reserve. His first day of active service was a week later on 24 September when he arrived at the Naval Training Station in Farragut, Idaho for recruit training as an Apprentice Seaman (AS). Upon completion of training he was assigned to Headquarters Squadron (Hedron), Fleet Air Wing Six at Naval Air Station Whidbey Island, Washington where he worked on aircraft. During his time at Whidbey Island he received a promotion to Aviation Machinst’s Mate Third Class (AMM 3/c). He remained with FAW-6 for six months before being transferred to the Naval Air Station in Astoria, Oregon.

In June of 1944 Ray was transferred to the newly launched USS Munda (CVE-104), a Casablanca-class escort carrier, where he was an aviation elevator operator. He was received aboard on 8 July 1944 when the carrier was commissioned at Astoria.

Ray was inducted into the Solemn Mysteries of the Ancient Order of the Deep on 26 August 1944 in one of the Navy’s time-honored “Crossing the Line” initiation ceremonies when the USS Munda crossed the equator for the first time on the way from North Island, San Diego, California to transport brand new aircraft and Marine Wing Service Squadrons to Espiritu Santo at Vanuatu in the South Pacific.

Ray did have a misstep when he was court-martialed in December 1944 upon missing the Munda leaving port en route to Pearl Harbor – he was away over leave for ten hours in what he described as an unintentional “foul up.” As a result his pay and rating were docked, but he returned to the Munda in January 1945.

In the last part of 1945, the USS Munda was part of the Naval occupation of Japan and anchored off the coast of Japan in August and September 1945 and in Tokyo Bay from September to October 1945. The Munda’s final assignment was part of Operation Magic Carpet which brought American forces home from bases in the Pacific.

Ray Talifson was honorably discharged on 15 December 1945. He was entitled to the American Area Medal, the Asiatic-Pacific Area Medal, and the World War II Victory Medal. Ray returned home to his wife and young sons in Montana and spent the rest of his career as a carpenter. Ray died on 3 November 1965 near Lincoln, Montana from injuries sustained in an automobile accident.