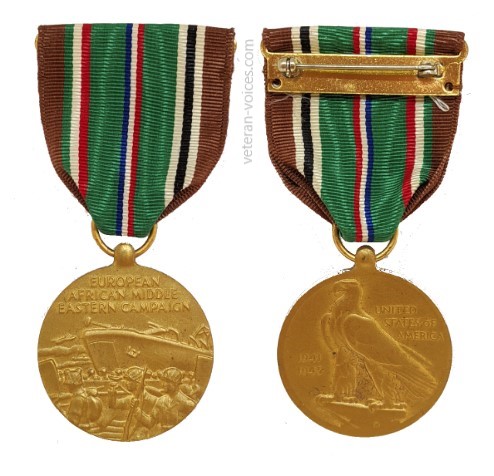 Today marks the 75th anniversary of “V-E Day,” representing the allied victory in Europe during World War II. To commemorate the occasion, we wanted to talk about the history of the campaign medal awarded to service members in the European theater of World War II.

The European-African-Middle Eastern (EAME) Campaign Medal was established by President Franklin D. Roosevelt’s Executive Order 9265 dated 6 November 1942, and subsequently amended by President Harry S. Truman’s Executive Order 9706 dated 15 March 1946, to be awarded to members of the Armed Forces who served in one of those regions between 7 December 1941 and 8 November 1945. The European-African-Middle Eastern Theater included service in the countries of Europe, European Russia, Greenland, Iceland, the countries of Africa, and in Iran, Iraq, and Turkey. The service criteria included that a service member had:

General Dwight D. Eisenhower requested that the medal depict an invasion scene, and the design was submitted to the Commission of Fine Arts in September 1946. The obverse of the EAME medal was designed by Thomas Hudson Jones. It showed an LST landing craft and airplane in the background with troops landing under fire in the foreground and the words “European African Middle Eastern Campaign” across the top. The reverse of the medal was designed by A. A. Weinman and was the same design as used on the Asiatic-Pacific and American Campaign Medals which depicted a bald eagle in the center, the dates of American’s participation in the war, “1941-1945,” to the left of the eagle, and “United States of America” to the right.

Army Campaigns of the EAME:


Navy Campaigns of the EAME:

We have provided a downloadable resource PDF of the European-African-Middle Eastern Campaign Medal for personal use.