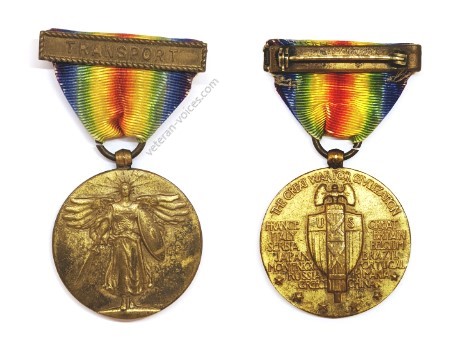 Happy Veteran’s Day! It is with gratitude that we honor our veterans past and present.

Veteran’s Day began in 1919 as Armistice Day, a remembrance of the first World War and the anniversary of the signing of the Armistice recognizing its’ end on 11 November 1918. President Dwight D. Eisenhower changed the name to Veteran’s Day in 1954 to incorporate the veterans of the second World War and Korea; and today it is a national holiday of appreciation to all American veterans past and present.

With the day’s origins in mind, we wanted to share the history of the World War I Victory Medal given to servicemen who served honorably in the Great War.

After claiming victory in the war, the allied and associated nations of the Great War agreed to create a medal commemorating the war to be called the “Victory Medal.” Each country would be responsible for distributing the medal under its own conditions, but the nations collectively agreed to adopt a set of standards for its design:

The United States adopted the design of sculptor James Earle Fraser (who also designed the Navy Cross and the “buffalo” nickel) on 14 November 1919, which showcased Victory wearing a spiked crown reminiscent to the Statue of Liberty. The reverse showed a fasces (medieval battle axe) atop the shield.

The United States’ Victory Medal was established by War Department General Order Number 48 (1919) for military service between 6 April 1917 and 11 November 1918. Specifications were disseminated through General Headquarters of the American Expeditionary Forces General Order 75 (2 May 1919), and Department of the Navy General Order 482 (30 June 1919). The medal was renamed the “World War I Victory Medal” after World War II necessitated its own version of a victory medal.

Both the Army and Navy also designated battle and service clasps which could be worn by Navy personnel and by the soldiers, Marines and members of the Navy Medical Corps who were attached to the American Expeditionary Forces. All of the clasp designations can be found on our resource World War I Victory Medal, a PDF available to download for personal use.