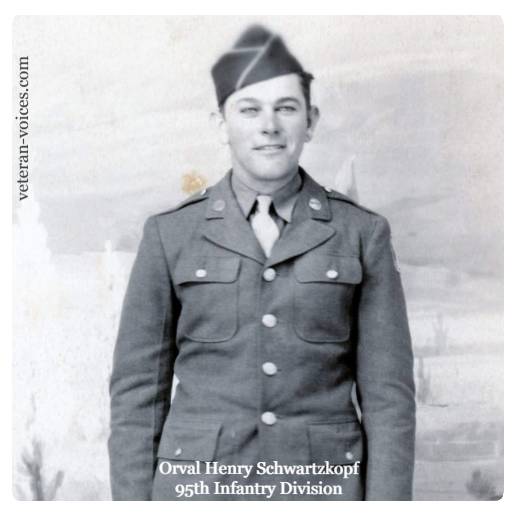 Orval Henry Schwartzkopf was born on 10 February 1919 in Perry County, Illinois, the son of Henry Schwartzkopf and Lula Egbert. He was 21 years old and working on the family farm with his father when he registered for the Selective Service Draft on 16 October 1940 in Pinckneyville, Illinois; he enlisted in the Army on 17 September 1942 at Peoria, Illinois.

Schwartzkopf became a fire control instrument operator with the 95th Infantry Division in the European Theater during World War II. On the photo above, which was inscribed “taken in desert,” his age (23) and the year written (2 January 1944) don’t quite match up, but part of the shoulder sleeve insignia for the 95th is just visible on his left arm; the photo may have been taken at a local studio when the Division was stationed at Camp Coxcomb, Indio, California in January 1944.

The 95th Infantry Division arrived in England on 17 August 1944 for extended training, and then arrived in France on 15 September 1944. Less than a month later, after engaging in hard fighting at the Battle of Metz (France) as part of General Patton’s Third Army, the Division was bestowed the moniker “The Iron Men of Metz” for their bravery.

In late November 1944, the Division was tasked with taking the town of Saarlautern (Germany) and the bridge over the Saar River, ensuring the bridge remained intact for the push into Germany. The Division was ultimately successful, but the fighting lasted for weeks. On 7 December 1944, a week before that battle was considered won, Corporal Orval Schwartzkopf was hit with fragments of an artillery shell in the neck, lungs, and abdomen. He survived, but spent the next 14 days in a coma, and the next six months in hospitals in France and England. A few weeks prior he had already experienced a close call and was wounded when, as his hometown newspaper reported, the Germans “shot the dog tags from around his neck and his field jacket was pierced.” Corporal Schwartzkopf was returned to the United States on 5 May 1945, where he was a patient at the Fitzsimmons Hospital in Denver, Colorado; he spent a total of 254 days in the hospital recovering from the wounds he received at the Saar.

In June 1945, he was given a 30-day furlough from the hospital and travelled home to Illinois where he married Irene Nehrkorn on 23 June before returning to Denver. He was honorably discharged on 26 November 1945 at Fort Bragg, North Carolina.

He returned to rural Illinois after the war and was active in the Tamaroa American Legion Post and the Du Quin Veterans of Foreign Wars Post. He died on 1 February 1977 and was buried at the St. Charles Catholic Cemetery in Du Bois, Illinois.

Research Note: Orval Schwartzkopf’s service record was among those burned in the National Archives fire of 1973 and, until unit records can be researched, it is unknown as to which of the regiments of the 95th Infantry Division he was assigned. However, his case has been a primary example that his service has not been lost or forgotten just because his official service record is gone.