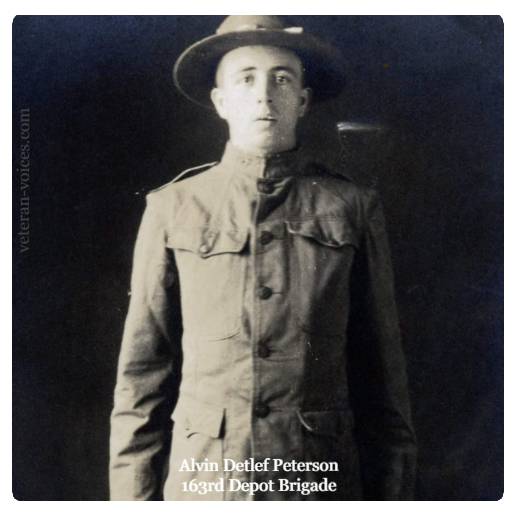 Alvin Detlef Petersen was born on 17 December 1895 in Teeds Grove, Clinton County, Iowa to parents Jerry and Anna Petersen. He was the grandson of German immigrants who had settled in Iowa.

He was a farmer by trade and registered for the first draft of World War I on 5 June 1917 in Andover, Iowa. He married Alvena Gehlsen a year later on 10 July 1918 in Clinton County, Iowa. Fifteen days later, on 25 July 1918, he enlisted at DeWitt, Iowa and began his seven months of military service.

He was likely first sent to Camp Pike in Little Rock, Arkansas – where the photo above was taken.

The back of the real photo postcard was inscribed with his name and residence, and the name of Ewing Photographers located across from the depot at Camp Pike.

At some point during the intervening months he received a promotion to Private First Class and was also transferred to Camp Dodge in Des Moines, Iowa where he became part of Company 2, [Unknown Battalion], 163rd Depot Brigade. He was honorably discharged at Camp Dodge on 18 January 1919. His first son was born a few months later.

Alvin Petersen returned to farming in Andover, Iowa where he spent the remainder of his life. He died on 21 July 1967 in Andover and was buried in the Andover Cemetery.