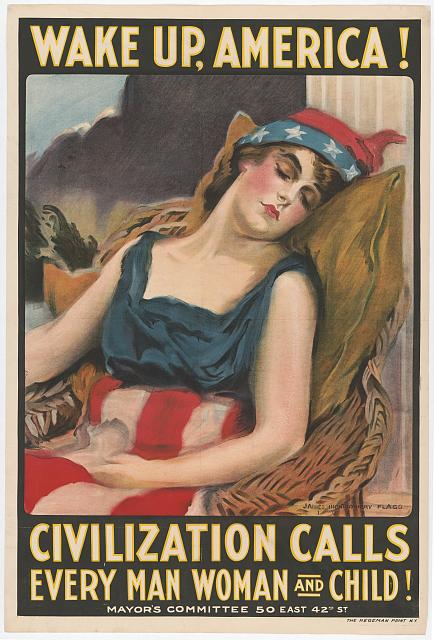 On 6 April 1917, President Woodrow Wilson had declared America’s entrance into the Great War and a nation-wide recruitment effort to build America’s armed forces was under way. A demonstration day was set up across the country to coincide with Patriots’ Day (or Lexington Day) – a commemoration of the the Battles of Lexington and Concord which opened the American Revolution on 19 April 1775.

In New York City, the Recruiting Committee of the Mayor’s Committee on National Defense announced a plan to call their Patriots’ Day recruitment efforts “Wake Up, America Day.”

It was a day for patriotism which began with a reenactment of the famed ride of Paul Revere. At midnight the chimes at Trinity Church in Manhattan were rung and young suffragist Jean Earle Mohle, dressed as a Continental soldier, rode on horseback through midtown Manhattan beckoning men and women to “wake up” and fight. There were patriotic meetings and parades in every borough and neighborhood featuring children from many organizations of schools and scouts escorted by the newly formed Fifteenth and Sixty-Ninth Regiments, a twelve-hour vaudeville show at Carnegie Hall with the brightest stars of the day such as Will Rogers and Ethel Barrymore, and Fifth Avenue was transformed for a full-scale parade. James Montgomery Flagg (who designed the famous “Uncle Sam” recruitment poster) was charged with designing the posters and all of the parade floats which depicted scenes from American history. At the Fifth Avenue parade, a flyover by Army and Navy planes dropped pamphlets into the crowd encouraging them to summon the “Spirit of 1776” and to enlist in the war efforts.

In the feature poster image, James Montgomery Flagg depicted Actress Mary Arthur as Columbia, a personification of America and liberty, asleep while storm clouds gathered in the background. In the second poster, a young woman, believed to be Jean Earle Mohle, was shown dressed as Paul Revere.