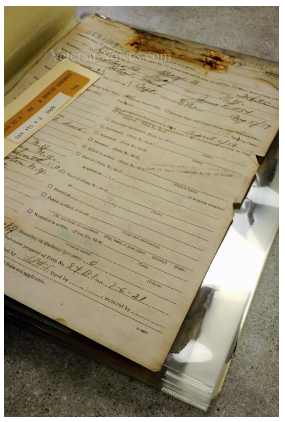 What is an Official Military Personnel File? (OMPF)

In short, an Official Military Personnel File is the official administrative record of a veteran’s service history. The National Archives has complete files for over 34 million veterans who served during the 20th Century (to include World War I, World War II, Korea, Vietnam, the interwar years, and beyond), and several additional millions of partial files and supplemental records.

What information is found in an Official Military Personnel File?

An OMPF is one of the foundational building blocks in compiling information about a veteran’s service. It provides an overview of the service history: personal and medical information; date and type of enlistment; assignments, promotions, duty stations, and transfers; training and qualifications; decorations and awards; disciplinary actions, performance, and administrative remarks; date and type of separation from service (including the DD-214 separation form or its equivalent); and in some cases, veteran photographs (particularly in Navy and Marine files).

What is NOT found in an Official Military Personnel File?

An OMPF does not include detailed information about a veterans’ participation in battles or engagements, nor does it include information about the veterans’ job(s) during his or her service. Essentially, a complete OMPF is the foundation or skeleton of a service history, but not the entire history.

The National Personnel Records Center did experience a devastating fire in 1973, in which some 22 million personnel files were damaged or destroyed – many of which were Army & Air Force records from 1912 – 1959.

However, many of the damaged files are STILL being restored. The photo at left, is one of those files from World War I. The NPRC restores and reconstructs records after receiving a request for that veteran, so you can’t know that the file you’d like is gone until you ask.

If a file was completely destroyed, the NPRC staff will do a search of some ancillary records for that veteran, which may provide final pay vouchers or even hospital admissions records that can be a starting point to reconstruct a file.

Would you like to order an Official Military Personnel File?

We are able to provide copies of records that are archival. Records become archival 62 years after the date of separation from military service, so we can provide records of service members who separated from service from 1917 through 1956 (Note: This is a rolling date, so as we move through 2019, records from 1957 will become archival every day. Pre-1917 personnel records are housed at a different National Archives facility and are not included among the OMPFs offered here).

You can submit a request for an Official Military Personnel File here:

If you have questions or comments, you can use our contact form or contact us via e-mail at: