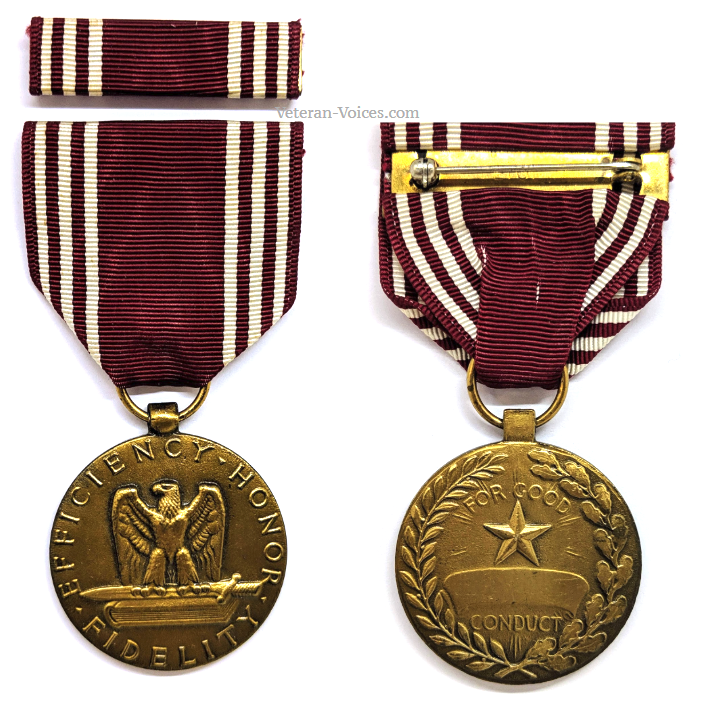 The Army Good Conduct Medal was established for the Army & Army Air Forces by Executive Order 8809, 28 June 1941* – less than six months before the United States entered into World War II. It was to be selectively awarded to enlisted soldiers who distinguished themselves among their fellow soldiers through exemplary conduct, efficiency, and fidelity throughout a specific period of continuous active service – one year during wartime, and three years during peacetime.

“There is hereby established the Good Conduct Medal… Such medal may be awarded for exemplary behavior, efficiency, and fidelity…”

Unit commanders were authorized to award the Good Conduct Medal to soldiers who met each of the following criteria for a qualifying period of service:

A soldier could be awarded the Good Conduct Medal multiple times, for different periods of service. Subsequent awards were denoted with a clasp that could be worn on the service ribbon and suspension ribbon (an example of the third award is shown at right). The second through fifth awards were shown with a bronze clasp with 2-5 loops; the sixth through tenth with a silver clasp with 1- 5 loops; and the eleventh through fifteenth awards with a gold clasp with 1-5 loops.

We’ve created a downloadable PDF of this post, that can be printed for personal use. Available here: Army Good Conduct Medal