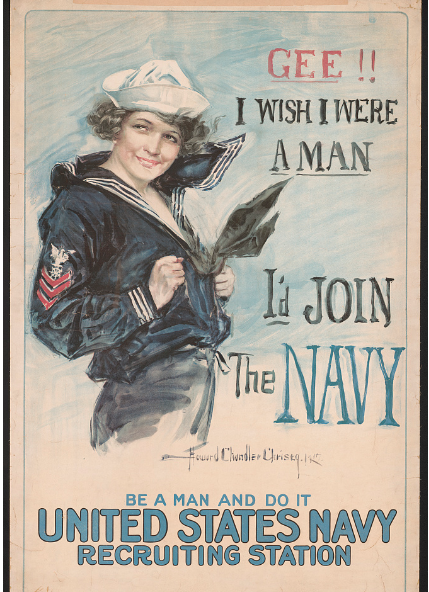 Loretta Walsh was the first female inducted into the United States Navy. Her story is not only inspiring, it is empowering; as she paved the way for women to join the military before they even had the right to vote.

Miss Walsh was born 22 April 1896 in Olyphant, Lackawanna, Pennsylvania, the daughter of James J.  and Catherine [Cummings] Walsh. Described as spunky and ambitious, Loretta enlisted as a Yeoman(F) and was inducted on 21 March 1917, with a rank of Chief Yeoman; thus serving as the first active-duty woman to serve in the Armed Forces and the first female Petty Officer in the U.S. Navy.

Across the country, newspaper headlines hailed the arrival of the first active-duty female in the Armed Forces.

Although women had been serving as nurses in the military, those roles were still considered civilian positions. Thus Loretta Walsh paved the way for women to receive the same benefits as men serving in the Armed Forces.

Women followed Walsh’s lead and  joined the Navy in record numbers. The Yeomanettes served primarily in clerical positions, and provided valuable skills to the war effort.

To learn more about Loretta’s life after the war, join me for part two.

Navy Recruitment Poster
Christy, Howard Chandler, Artist. Gee!! I wish I were a man, I’d join the Navy Be a man and do it – United States Navy recruiting station / / Howard Chandler Christy. Photograph. Retrieved from the Library of Congress, <www.loc.gov/item/2002712088/>.