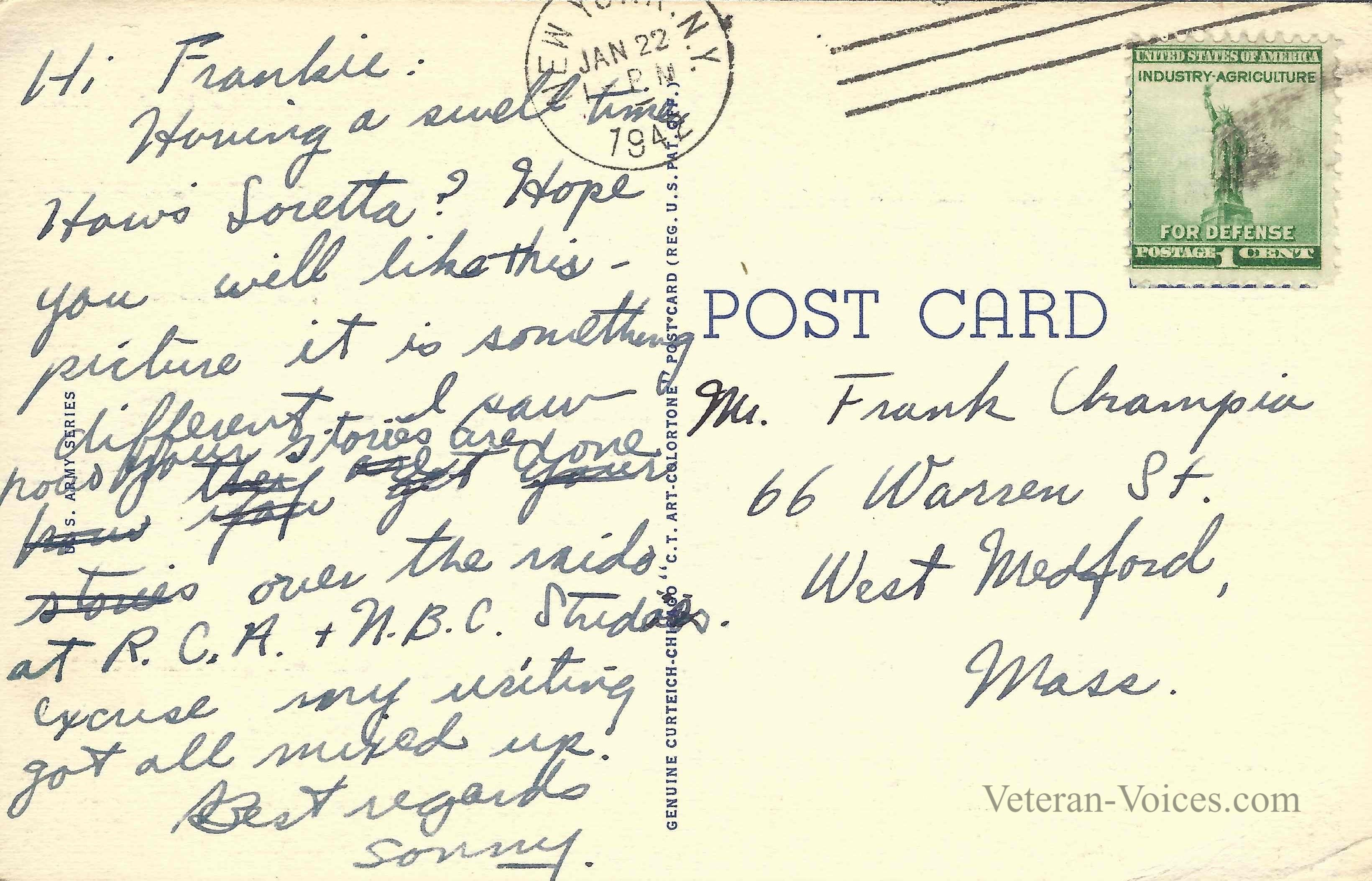 Frank Chiampa of West Medford, Massachussetts, received this postcard, dated 22 January 1942 from New York, New York. The sender was a man named Sonny, who  inquired about Loretta; and he made mention of having seen how Frank’s favorite radio programs were done over at the studios of  RCA and NBC.

I wonder what some of Frank’s favorite radio programs were at the time. Was he tuning in to listen to Inner Sanctum Mystery, Joe & Mabel, or The Adventures of the Thin Man?

On 7  December 1941, radio stations across the country interrupted their regularly scheduled broadcasts to break the news of the attack on Pearl Harbor. Were Sonny and Frank near a radio when the news broke? If not, I can’t help but believe they were tuned in on 8 December 1941, when President Franklin D. Roosevelt delivered the Presidential Address to Congress [Infamy Speech]. The United States of America was at war.

In doing some genealogical research, we found that Frank Chiampa (not Champia as spelled on the postcard) was born 1 October 1928, the son of Eugene Chiampa and Assunta “Suzie” [Dilorenzo] Chiampa. In the 1930 US Federal Census, the family was enumerated in Medford, Middlesex, Massachusetts. The household of three was renting a home at 51 Webster Street. Eugene worked as an upholsterer in a factory.

By the 1940 US Federal Census, Frank (age 11), his sister, Loretta (age 9), and his mother, Susie, were living with Susie’s parents, Antonio and Carmella Dilorenzo at 48 Fountain Street, Medford, Middlesex, Massachusetts. Susie was listed as married, but it was marked through; so it is unclear what her marital status was in 1940. Her occupation was listed as a saleslady in a candy store.

In 1957, Frank Chiampa married Ada Claire Evetts at St. Paul’s Catholic Church in San Antonio, Texas. Frank worked as a supervisor at the Air Force Special Communications Center at Kelly AFB. He was an avid postcard collector and a charter member of the Lone Star Postcard Collectors Club, established in 1962, where he served as the first editor of the club’s monthly paper.

Note: It is possible that Sonny was actually Frank’s uncle, Pasquale Dilorenzo. Pasquale served in the Army from 1942 to 1945.

Ready for us to help you with your family tree?
Contact Us Now