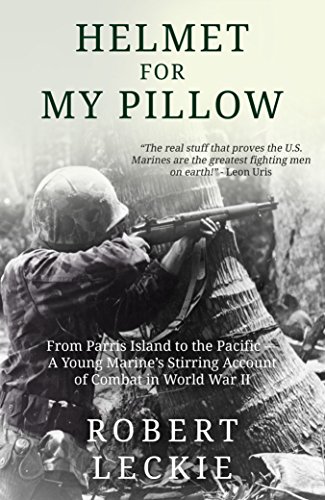 Helmet For My Pillow by Robert Leckie

As we build Veteran Voices, we want to be sure that the stories of veterans are at the center of all that we do. So we’ve decided to feature a book each month that showcases the accounts of our twentieth century veterans. Our January book is Helmet For My Pillow by Robert Leckie.

If you’ve watched the HBO Miniseries The Pacific, then the name Robert “Bob” Leckie will be familiar. After all, a third of the miniseries’ narrative is based on this man and this book. If you aren’t familiar with the miniseries… What are you waiting for?! It’s on Prime, so pause here and go spend the next ten hours watching one of the great Tom Hanks / Steven Spielberg masterpieces of our time! Although I’m only partially kidding, I digress… Even if you aren’t familiar with the miniseries, this book stands on its own as, possibly, one of the most honest and compelling auto-biographical accounts written about World War II.

A helmet for my pillow,

A poncho for my bed,

My rifle rests across my chest –

The first stanza of The Battle of Tenaru, August 21, 1942 by Robert Leckie

Helmet For My Pillow is the story of Pfc. Robert Leckie of the First Marine Division, and he regales readers with a finely woven narrative beginning with his enlistment right after Pearl Harbor, to Marine Corps boot camp at Parris Island, and to the islands and atolls of the Pacific. Robert Leckie was in every First Division engagement except Okinawa. Having been carried off of Peleliu with serious internal injuries, received from a blast concussion, after coming within a hairsbreadth of meeting his final fate with a Japanese mortar shell.

Through the lens of 74-years of history we, today, can tend to view World War II with a general sense of romanticism – courage, morality, and heroism for all. Robert Leckie’s story is not that story. Sometimes profane, often irreverent, and with the benefit of sharing his account in hindsight, Leckie wrote himself as the anti-hero of his own story. With an inquisitive intellect, dry humor, and a sometimes willful and rebellious spirit, Leckie often seemed to find himself at internal odds with the discipline and rigidity of the Marine Corps. He had a deep sense of duty and pride as a Marine. But as a self-described “brig rat,” he also had no compunction in scheming ways to go AWOL, steal rations, or take a “vacation” at the hospital – just to get off of New Britain and spite a commanding officer he hated.


…And here is the point in battle where one needs the rallying cry. Here where the banner must be unfurled or the song sung or the name of the cause flung at the enemy like a challenge. Here is mounted the charge, the thing as old as warfare itself, that either overwhelms the defense and wins the battle, or is broken and brings on defeat. How much less forbidding might have been that avenue of death that I was about to cross had there been some wholly irrational shout — like “Vive l’Empereur,” or “The Marine Corps Forever!” — rather than that educated voice which said in a sangfroid that was all at odds with the event, “Well, it’s our turn, now.”

While his entire story is equally entertaining, compelling, and informative, there were two “sticking points” for me as a reader – his grappling with his own mortality and expendability in such a vast war; and during his epilogue, in which he spoke of sacrifice and he began to reconcile “What was it all for?”

[A woman asked] “What did you get out of it? What were you fighting for?” … But I could not answer the first question, for I did not know what I had gotten out of it, or even that I was supposed to profit.

Now I know. For myself, a memory and the strength of an ordeal sustained; for my son, a priceless heritage; for my country, sacrifice.

After the war Robert Leckie was a reporter for the Associated Press and various other newspapers. Helmet For My Pillow (1957) was the first of over thirty military history books that he wrote, and it was awarded the Marine Corps Combat Correspondents Association award upon publication.

If you’ve read Helmet For My Pillow (or now plan to) or are a fellow fan of The Pacific, we’d love to hear your thoughts in the comments below.

You can also check out more books on our page Military History Books.