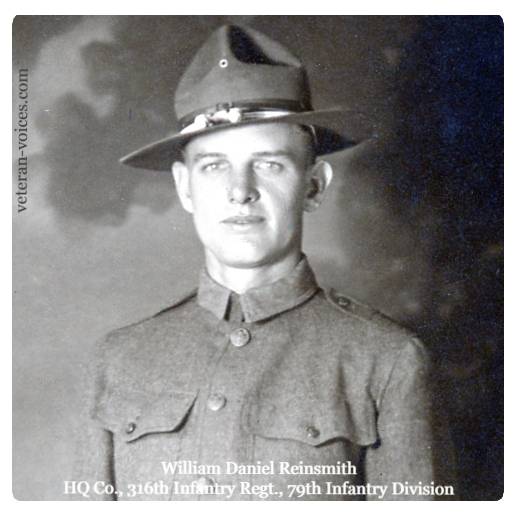 William was a 27-year-old rodman (survey crew chainholder) for the Lehigh & New England Railroad Company when he registered for the first World War I draft on 5 June 1917. He was called for service on 11 September 1917 and was inducted a week later at Allentown, Pennsylvania. He reported to Camp Meade in Maryland as part of the first group of inducted men to become part of the National Army’s 79th Infantry Division.

While at Camp Meade William was assigned to Headquarters Company, 316th Infantry Regiment and received a promotion to Corporal in February 1918.

The 79th Infantry Division became part of the American Expeditionary Forces when they embarked for France in July 1918 – William, along with the rest of the 316th Infantry Regiment, departed for France from Pier 3 at the Port of Hoboken, New Jersey aboard the S. S. Agamemnon on 9 July. They arrived at Brest, France around 17 July.

While in France, William participated in the battles of the Meuse-Argonne offensive and also in defensive actions while the 79th Division was attached to the First Army.

He was returned to the United States ahead of the rest of the 316th Infantry Regiment due to chronic muscle inflammation; he left Bordeaux, France in a Convalescent Detachment aboard the S.S. Siboney on 20 February 1919. He was honorably discharged from service on 1 April 1919 at Philadelphia, Pennsylvania.

William Reinsmith returned home to Slatington, Pennsylvania where he lived the remainder of his life, eventually returning to the Lehigh & New England Railroad where he became an engineer. William never married and died on 2 November 1959. He is buried at Union Cemetery in Slatington.