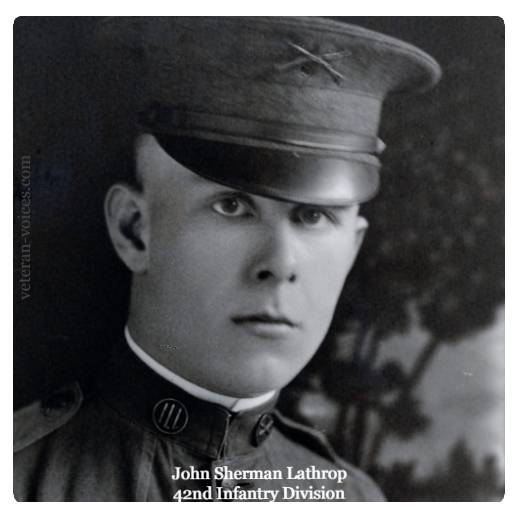 John Sherman Lathrop was a student at the University of Illinois when the United States entered into the Great War. In addition to his course of study, he had also enlisted in the Illinois National Guard [Battery F, First Illinois Field Artillery] on 9 November 1915.

When President Woodrow Wilson began federalizing National Guard units, Battery F (and John Lathrop with it) reported for duty at Champaign, Illinois on 30 June 1917 and assembled with the rest of the First Illinois Field Artillery at Ft. Sheridan, Illinois a week later. John Lathrop was honorably discharged with a Surgeon’s Certificate of Disability on 17 July 1917, with “excellent character and good and faithful service.” However, the discharge didn’t seem to stick for long and he re-enlisted with the same battery and unit on 5 October 1917 at Camp Mills, Long Island, New York. By that time, the First Illinois Field Artillery had become the 149th Field Artillery Regiment (75mm) of the 42nd Infantry “Rainbow” Division.

Although the United States had entered into the war in April 1917, it only had a standing regular army of just over 127,000 men, who were scattered across the country and U.S. territories in regiments of about 1,000 men each. By late summer there were still no U. S. soldiers aiding the allies at the front, and the pressure was on to raise at least four full strength divisions and get them quickly to France. Both the New York and Pennsylvania National Guard were large enough to form divisions, but the War Department was concerned with showing either favoritism or slight by sending one to France first. An idea formed by then Major Douglas MacArthur solved the dilemma by raising a new division comprised of National Guard units from 26 states and the District of Columbia that would cross the United States “like a rainbow,” and the 42nd Infantry Division was born.

John Sherman Lathrop remained with Battery F, 149th Field Artillery Battalion for the duration of the war, but was returned to the United States at Newport News, Virginia in December 1918 aboard the USS Aeolus in a Casual Company of men who were sick and wounded. He was discharged from the Army at Camp Grant, Illinois in February 1919.

After the war, Lathrop returned to the University of Illinois and earned his degree in Ceramics Engineering in 1922. He removed, with his wife and children, to Los Angeles, California during the 1920s and was employed by the Vernon Pottery Company at the onset of World War II. He remained in Los Angeles until his death in 1964. John Sherman Lathrop was born in November 1897 at Chicago, Illinois to parents John C. B. Lathrop and Charlotte Cooley.