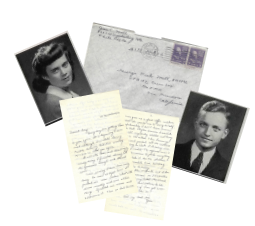 It is always bittersweet to find old letters that have been discarded. While excited to be able to preserve these treasures, it is difficult to know that these prized possessions are no longer with family.

Such is the case with a bundle of letters we were able to purchase that were written to George Peck Mell. Many are from his family addressed to him during his time at Wheaton College in Illinois. A few are addressed from his wife, Jean, while he was serving in World War II.

Robert and Frances, their sons: David L. (8), James R. (6), George P. (4), and Frances’ mother, Jessie Peck, were enumerated at 124 Madison Avenue, Decatur, DeKalb, Georgia in 1930. Robert was a life insurance salesman and a veteran of World War I.

George graduated from Druid Hills High School in May 1942 and headed off to attend Wheaton College near Chicago, Illinois. He left Wheaton in 1944 to join the Navy Air Corps.

He reported to the Naval Recruiting Station in Macon, Georgia, on September 7, 1944, headed to Jacksonville, Florida’s Navy Training Center, and was sent to Norman, Oklahoma on October 24, 1944.

By 1940 Lucile, a social worker, and her daughters, Jean and Lois, are enumerated at 5111 Hazel Avenue, Philadelphia, Philadelphia, Pennsylvania. It is unclear the status of John in the household.

Jean Lucille later attended Wheaton University, where she met George. They both were members of the Wheaton Chemical Society. Jean graduate from Wheaton in 1945. After graduation, she worked as a chemist in the research laboratory of the Philadelphia Navy Yard.

George Peck Mell and Jean Lucille Craig were married in late June or early July of 1945. The ceremony took place at the Glenn Memorial Church Chapel, on the campus of Emory University (Atlanta), with Dr. David Mackay officiating. Their marriage announcement appeared in the The Atlanta Constitution on July 6, 1945.

At this point we pick up our featured letter. Jean was back in Philadelphia working at the Navy Yard. Her letter, postmarked November 21, 1945, was addressed to: George Peck Mell, AOM 3/c, VPB 197, Crew 344, c/o FPO San Francisco, California. George was an Aviation Ordnanceman 3rd Class with the Patrol Bombing Squadron 197 stationed in California.

Every day I’m getting closer to you again. It is beginning to seem real, although I’m still having trouble believing that I’m coming to SD to be with you again.

It was cold, clear, and exceedingly windy today. I finished slicing all the specimens though and stained some.

This evening I have been very busy. As soon as I got home I packed our new wooden chest with linens mostly and some other things. I painted our name and address on it. Then we had dinner.

Lois gave us a glass coffee maker which she wants me to bring to Calif. Unfortunately I don’t have room to do that. After dinner I washed out all my dirty clothes and hung them in the cellar. Then I came upstairs and packed all the suitcases I’m going to check. I’ll carry one and the radio. The express man is coming tomorrow to pick everything up and take it to the station. I had a terrible time deciding what clothes to bring.

It is after midnite and I have to work tomorrow so I had better close. I bought my ticket ($70.31) and picked up my reservation to Chi. I’ll have to see if I can get a cancellation from Chi. on.

All my best love, Jean

By 1950 George and Jean were in Atlanta, where George was listed in the Atlanta City Directory as a student. They eventually moved to Newtown Square, Pennsylvania.

Ready to learn more about the veterans in your family? Contact Us