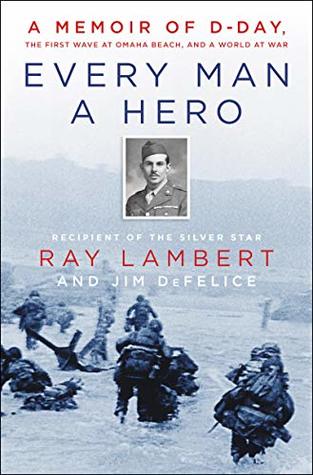 Every Man a Hero: A Memoir of D-Day, the First Wave at Omaha Beach, and a World at War by Ray Lambert and Jim DeFelice

I did what I was called to do. As a combat medic, my job was to save people, and to lead others who did the same. I was proud of that job, and remain so. But I was always an ordinary man, not one who liked being at the head of a parade.

As we come upon the 76th anniversary of “D-Day” I wanted to share the memoir Every Man a Hero by 1st Infantry Division combat medic Ray Lambert.

Written in 2019 at age 98, Lambert decided it was finally time to share his story because, in his own words, “I am one of the last men left who were there on that day. I am one of the few remaining links to the courage and strength that carried the Allies to victory.”

Although this book is a memoir of D-Day, the title is also a bit of a misnomer, because 6 June 1944 marked the end of Lambert’s war. When he landed in the first wave on Omaha Beach it was his third amphibious assault landing with “The Big Red One” having previously been part of the Allied invasion of both French North Africa and of Sicily. He had also received a Silver Star for gallantry in action in Tunisia.

…I was behind the enemy advance. At least one German machine gunner began throwing lead at me as I drove away. I made it to the aid station. There was no time to count the holes in the Jeep – I helped get the men from the vehicle and went to work on their wounds. I guess they were impressed when they heard the story back at Division Headquarters. Three months later, I got a citation… Staff Sergeant Arnold R. Lambert… is awarded the Silver Star for gallantry in action.

Ray Lambert, an excerpt on the events which led to his Silver Star


The book begins with Lambert’s boyhood days in rural Alabama and the events that would shape his future and lead him to enlist in the Army in 1939. It then follows his service in chronological order, with anecdotes and explanations that make you feel as if you’re sitting down to have a conversation with the man himself. It ends with a brief section on the importance of the legacy of “the greatest generation” and of every hero who only saw themselves as ordinary individuals.

I and my generation faced the same complex truths and harsh realities mankind has wrestled with since Adam and Eve. As many before and since, I discovered that fear and courage can be close companions, and that wanting to do the right thing is no guarantee that you will succeed.


I read a lot of combat memoirs and history books so that my research and writing is informed by those who lived it. I can honestly say that this book struck me in a way that not many are able to and has become one of my favorites. Although it covers some of the most harrowing events in history, the book doesn’t feel “heavy” to read. The frankness in Lambert’s storytelling is peppered with humor and “blink and you miss it” quips that will have you smiling while you read – you’ll also be thinking about some of the wisdom passed down from one of the last “every man heroes” of D-Day long after you finish.

If you want to hear more from Ray Lambert before or after you read the book, the YouTube channel for the American Veterans Center posted an hour long interview with Ray Lambert in March 2020: